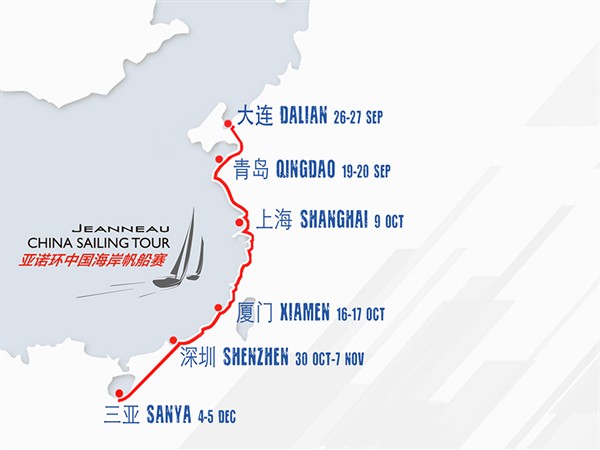 Jeanneau and its Chinese distributor Speedo Marine are introducing the Jeanneau China Sailing Tour to be held around the country’s coastal cities from September to December 2015. The first event of the tour will take place in Qingdao, China Sept 19-20.

Hosted by partner yacht clubs in Dalian, Qingdao, Shanghai, Xiamen, Shenzhen and Sanya, the Jeanneau China Sailing Tour brings some of the best Chinese sailors to challenge themselves on coastal match races and offshore passages.

The teams will compete on identical Jeanneau Sun Fast 3600s, which is the latest addition to the Jeanneau line of racing sailboat.

Each stopover will be an opportunity for the sailors to share their international racing experience with the local sailing communities during conferences, while the coastal match races will allow amateurs to join the pros in the battle. Passages between the cities will further consolidate the sailors’ experience of offshore sailing.

Jeanneau partnered with Dongfeng Race Team in December 2013 to supply Sun Fast boats for the recruitment and training of its Chinese squad.

“Following their adventure, the Volvo Ocean Race has been a source of pride and excitement as an official partner,” says Jeanneau Asia Pacific Director Paul Blanc. “The Chinese sailors leave a legacy of achievements with a podium place. We need to surf on that wave and continue to support the development of Chinese professional sailing and the general interest for the sport in the country.”

Jeanneau and their agent Speedo Marine, in partnership with local yacht clubs, will organize the event.