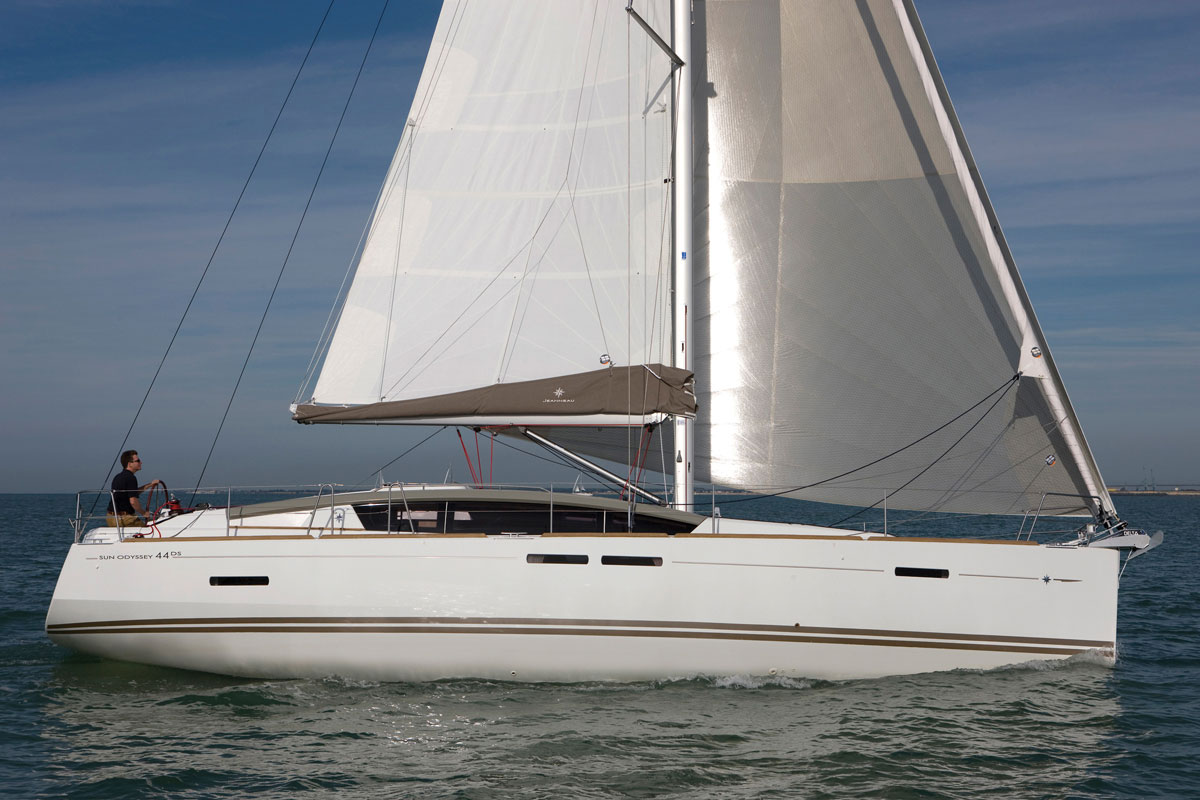 See the review on MySailing.com.au

Production boats from the stables of the more famous brands, work hard to differentiate themselves from each other with claims of their individual points of difference.

Jeanneau are keen to differentiate the new generation DS models from its own popular Sun Odyssey 9 series. Soon to follow the 44 is a 41 Deck Saloon to be launched in Europe in September.

Lee Condell from Performance Boating Sales the NSW distributor, is keen to point out that the new generation DS model retains the features that made models like the 42DS so popular in Australia, while improving further on such aspects as ventilation, use of space and ease of handling. “Elements like the German mainsheet system, self-tacking jib option, furling code 0 and chined hull all have great benefits for ease of handling in a range of conditions.”

One look at the exterior: the distinctive, low-radius curved cabin top with its squinting-eye window and light tan eyebrows, is designed to impress.

Down below the styling has just as much cred by accomplished superyacht designer Franck Darnet.

For those new to the concept of a deck saloon, the idea is to raise the cabin floor so that when sitting down below you get to see the view out of the windows and portholes.

The construction and attention to detail with the interior is still of a standard now expected by Jeanneau. A walnut timber finish is accented by white lacquer cabinets and stainless where required. The whole saloon oozes a modernistic style with plenty of light.

Every spare nook and cranny has a door ensuring everything has a secure place.

The saloon table is sturdy indeed with a flip over table top to convert from occasional table to dinette table. Cleverly set on an electric drive it lowers at the turn of a switch into a double saloon bed.

Opposite the six seater saloon is a long bench suitable for another berth. At its aft end is the navigation table. On the test yacht there was a nice little seperate refrigerator installed underneath the nav table.

The forecabin is a massive bed suitable as an owner’s berth, but we will come to that later. This guest bed includes reading lights either side, dressing table/desk and two seperate hanging lockers. The head includes a dedicated shower stall.

This large forecabin does not compare to the owner’s aft cabin. Coming down the companionway, to starboard is the entry to the aft cabin via the U-shaped galley. To port is the larger of the two heads on board. As the designated day head it is a capacious near-three square metres also providing access to the aft cabin.

The bed is near king-size and has side tables, lounge seats and hanging lockers. To add to its light and airy feel is the transom porthole providing streaming light and fresh air.

All cabin overhead hatches have sliding flyscreens and blinds, while the hull windows have aircraft style shutters in the cabins.

The galley has excellent light and ventilation portholes as well. Standard is the 180 litre fridge and a two-burner gas stove with piezo electric start.

One of the benefits of raising the cabin floor sole is the ability for large bin storage under the floorboards. 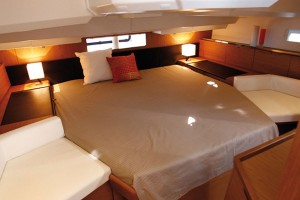 Jeanneau prides itself on building cruising yachts that are offshore capable and sail well. While the DS series is a move towards increasing the comfort factor, it still sits inside a Philippe Briand hull design and that name carries some cache.

The test boat’s owner currently twilight races Accountability reporting “in predominately light airs (I have been) very pleased with a first and second on handicap over five races. The 106% headsail and inboard track has me pointing far higher than I could achieve in (previous yacht) the 40DS.”

Jeanneau provide a polar diagram that shows in 10 knots of true wind it will glide gracefully at just under six knots hard on the wind (320).

The deck layout runs all lines aft; with sail control lines to aft primaries near the wheel and mast halyard lines to winches at the companionway under the bimini.

A neat trick is the running of deck lines under strong coaming covers; plus the countersinking of the headsail jib car tracks into these covers to minimise the amount of tripping and toe stubbing hazards.

The standard mainsail has in-mast furling and, while the mast is further forward to maintain a large cockpit and the large cabin size, the 106% overlapping headsail maintains good drive to the hull.

There is an option for a self-tacking jib which is a first for Jeanneau.

The boat offers a furling Code 0 sail option that would enhance its short-handed cruising, and racing, potential.

The now almost de rigeur aft chine provides two advantages to a yacht designer: it provides stability to the hull form when heeled, making a nicer ride all round and, just as importantly, it allows more space in that wonderful owner’s aft cabin.

As with most production yachts available the list of options is longer than a spinnaker pole. The base price starts at just over AU$300,000.

Much has been said about the looks of these new deck saloon styles. I have to say I like the difference, the low radius curve of the cabin top that carries well aft to become the cockpit coamings redefines what was becoming a startingly similar design profile amongst production yachts arriving in Australia.

What this new design provides down below makes it even more likable.