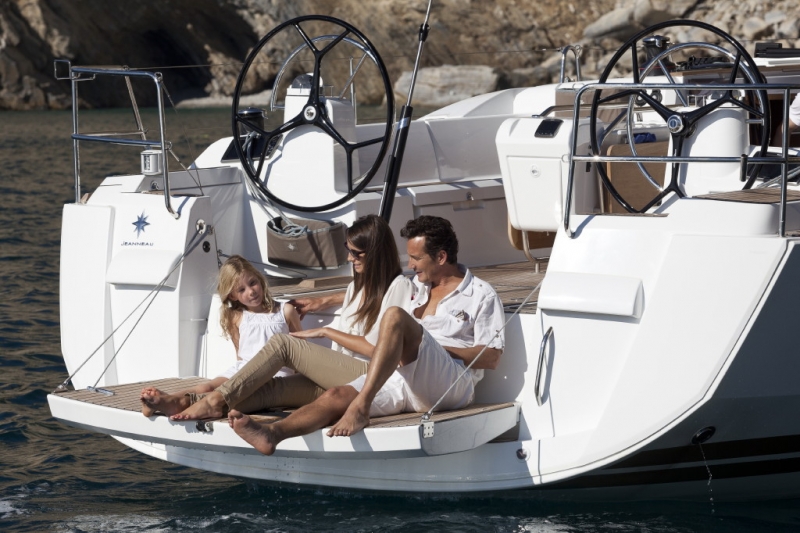 The Sun Odyssey 469 is the latest large cruiser from the French Jeanneau boatyard following on from last year’s SO509. The 469 emulates the functional 509, a boat that was my pick of the larger Jeanneaus last year. Good features shared include a dropdown chart table, solid joinery and a seamanlike layout of furniture (rather than acres of emptiness with nothing to lean on at sea).

The large production cruiser market is a very competitive arena, especially with the much improved Bavaria bringing out boats such as the stylish Vision 46 I was on recently, but Jeanneau has definitely stuck to what it does best with the 469 by producing a solid cruising yacht with few blemishes.

Looking at the saloon, the first striking feature is the inbuilt flexibility, which ranges from movable stools to the ability to change the starboard navigation station into a relaxed lounge area – after all you probably don’t need as much chart-work when in port and entertaining friends. Chart-work or more exactly bulkhead space for electronic plotters isn’t available here – unless you convert a locker or perhaps run a VGA cable to the nearby flatscreen television from the cockpit Raymarine MFD, as done by some builders.

Behind the nav station, the L-shaped galley is functional with rounded fiddles and corners so cookie doesn’t bruise in a tumbling sea. Laminated teak from the Alpi company is used throughout with solid trim. Mealtimes should go smoothly thanks to the three-burner, gimballed stove/oven, deep double sinks and white composite worktop for food preparation, while perishables have large 175lt top/front opening refrigeration. Only the flimsy plastic locker catches let down what is otherwise a well-made area. White goods options include air-con, dishwasher and washing machine and all can run off the Onan 6kW generator that can be housed in the cockpit locker.

Across from the galley the dinette can seat people all around it (thanks to aforementioned stools), and the large solid wood table easily transforms to a smaller version. Both lighting (LED with numerous hatches) and ventilation are good; though I’d prefer hatches opening in different directions. Yet another plus are the many handrails throughout which lead you safely forward to the owner’s suite.

Accommodation comprises a three-cabin layout with owner’s suite forward as on our test boat or a charter-friendly four-cabin version, all with en suites, which is impressive for this size of yacht. (In the four-cabin, a longitudinal galley allows space for the fourth bathroom).

The owner’s berth has an island bed surrounded by shelves and cupboard space is the best I’ve seen recently – under-bed, wardrobe and lockers, while the vanity/desk would allow me to lay out the laptop. Claustrophobia shouldn’t be an issue thanks to opening double hatches and elongated portlights, the three LED spotlights are ideal as well. Hatch space is minimal in the otherwise well-designed en suite with Perspex door separating the shower from the electric head.

For the guests the symmetrical aft cabins should suffice and despite the deep cockpit bulkhead there is enough headroom to allow sitting up while reading, but I’d grab the port one for that weekend cruise, as it has the bathroom nearby. There’s side access here to the 54hp Yanmar saildrive motor, while front access simply involves lifting the companionway steps on its gas-assisted struts. I noted that most key service points are within reach – water, oil and filters – and the starting battery was nearby too. Power output is from an 80amp alternator and there are twin 40amp battery chargers for the two 110amp house batteries.

The deck layout is fairly conventional, with deep cockpit, twin wheels and inboard shrouds for the deck-stepped rig. The large sprayhood and bimini are very welcome on a serious cruising boat, as this SO469 certainly is. The cockpit is the same length as the larger 509 but slightly narrower, so is a cosy fit for the large folding table which is fixed strongly with a stainless steel frame and includes a cool box. Another sturdy set of stainless steel frames surround the moulded binnacles – just what you need at sea – where the twin composite wheels share plenty of space with the Raymarine 9in HybridTouch plotter, i70 autopilot and thruster controls, plus the essential and good-sized compass. Looking aft, the wide swimplatform does the job and has a ladder for easy water access. Not to my liking are the now popular saloon-style doors on the main hatch, which means this critical space is either fully open or closed rather than ajar.

The optional teak decking felt surefooted and the uncluttered deck forward is ideal for sunbathing as well as being a good platform to hoist the Code Zero from. Teak handrails integrated on the low-profile coach roof give support and the flush hatches should ensure clear movement of sheets and lines across the foredeck. Up here, cruising needs are well met with a double bowroller, strongly supported by a stainless steel pulpit bobstay for flying big headsails from its end, while the substantial Quick windlass/capstan should mean few dramas for anchoring in a favourite hideaway.

Sail controls are also sensibly laid out, as on most of these newer Sun Odysseys, with the primary Harken 50s within reach of the helms while a second brace of H46s manage the seven-bank Spinlock SPX jammers on the coach roof and the halyards emerging from guttering. An electric H46 was fitted to our boat; a worthwhile option for both sheeting and halyard work. A continuous mainsheet (German) is used and slides on a Harken coachroof track, while running rigging was low-stretch Dyneema, which is also used for shrouds if the performance package is taken.

The cutter rig on the test yacht had an outer Selden furler for the Code Zero, while the inner foresail unwound from a Facnor drum giving plenty of headsail power for those light-wind tropical waters – alternatively for shorthanded work a self-tacking jib with track can be fitted. The mainsail used conventional slab reefing for the tri-radial Technique Voile sails – made of supple Mylar/taffeta they are a performance upgrade worth having especially with the occasional regatta in mind. The tall alloy Z Spars rig is supported by inboard shrouds, single adjustable backstay and a solid boom vang.

Jeanneau continue sharp pricing by offering only what you want to pay for, so many items can be optioned to ensure the basic price stays that way. A good option is the in-mast reefing for shorthanded sailing along with a self-tacking jib, while 360 Docking is another useful item for those tight marina manoeuvres, although only the Maxpower bowthruster was fitted on our boat, hull #3, and is adequate for most situations.

The Philippe Briand hull continues the distinct chine like its flagship of the Sun Odyssey range, the 509. The solid GRP hull has an injection moulded deck with large tie rods from the inboard shrouds going into the hull grid. Outside, the waterline is maximised, yet there’s enough rake on the stem and stern to give the 469 an elegant rather than abrupt profile. Her wide stern is tucked in with that hard chine, while a fairly standard cast iron fin or shoal draft version keeps everything upright, and a single spade rudder is used.

Motoring past the old stone pier at Cannes, my oil-skinned back to the cold rain that the Mistral blew along the Riviera, I cranked the four-cylinder Yanmar up to its maximum revs (3500) reaching 9.3kts as the three-bladed propeller did its job, with hardly any vibration felt on the Carbonautica steering wheel. Turning head-to-windward the electric Harken operated by my host Herve Piveteau easily hoisted the mainsail and silence reigned as I cut the engine.

Turning the bow towards distant Antibes I reached to unlock the larger jammer, allowing the genoa to roll out quickly in the 14-knot breeze, then trimmed it from the leeward binnacle before climbing to windward to perch on the gunwale. With feet nicely slotted on the teak foot-chock we sped off, horizontal telltales easily viewed from my steering position. Settling into my groove I watched the numbers rise until the Raymarine HybridTouch plotter reached 7.1kts SOG on the beat at 55 degrees, which was good given the lumpy seas. Throwing in a few tacks to dodge the big white boats gave me little to complain about as the long spade rudder responded well (despite the slack quadrant connecting cables).

Seeking more speed I unrolled the Code Zero and cracked the sheets to 75° to improve our numbers, hitting 9.6kts before preparing to gybe as we approached the rocky Lerin Islands, where the Cistercian monks have lived for centuries despite maritime marauders. But malice was not on our minds so we gybed away, a two-person job with Herve grabbing the clew of the lightweight Code Zero and walking it around the forestay while I sheeted it by the helm; the Raymarine autopilot steering us north towards the emerging bright lights of Cannes.

My thoughts? Well, the SO469 does the job of being a convincing cruising yacht with a level of refinement, both in practical terms and style that should win plenty of sailors’ hearts; but why not see for yourself!