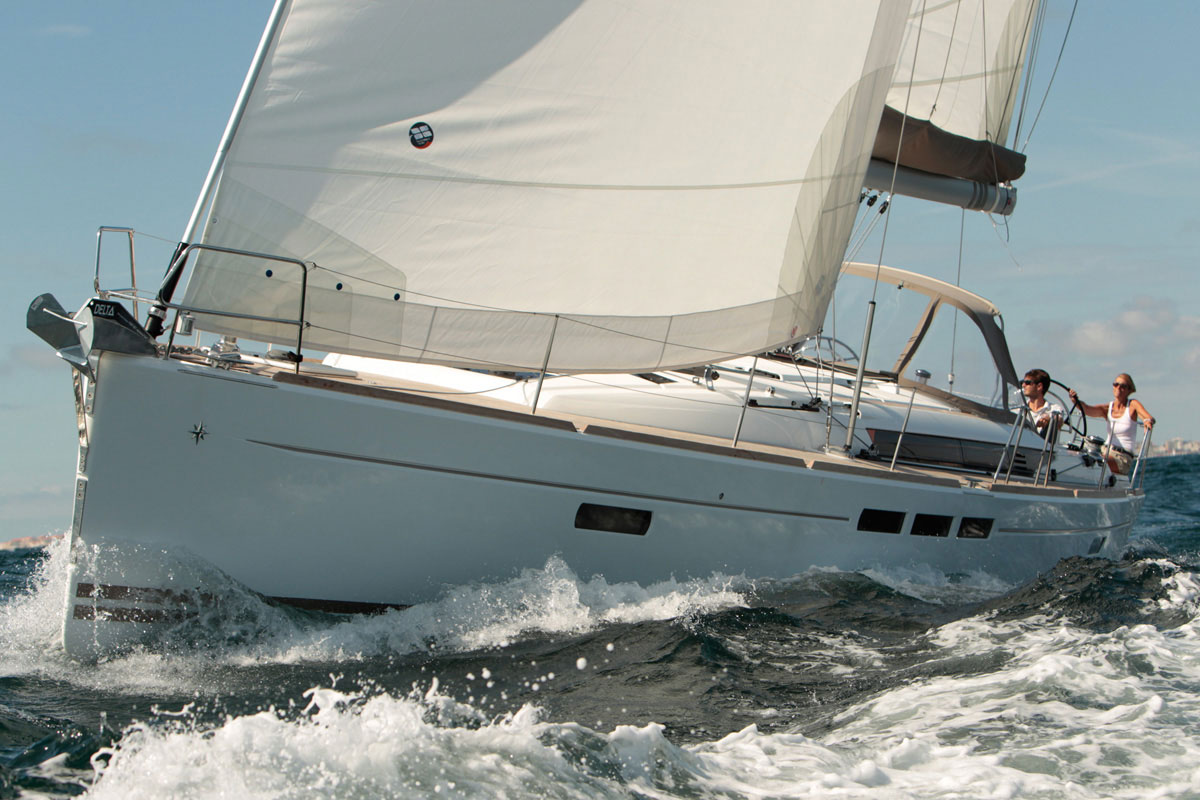 Stepping aboard via the wide transom swim platform reveals a teak-clad cockpit sole with both helm binnacles cleverly integrated into the side locker bulkheads. Circular stainless grab rails separate the Carbonautica composite steering wheels from the crew benches while both binnacles contain large compasses – a good layout – and each side also has a Raymarine e90w plotter alongside ST70 readouts.

Not so good are the engine buttons which are jammed low under the starboard side wheel but the throttle is in its usual place, on the inside gunwale. However this is a long way from the other engine control, the 360 docking joystick which is on the teak clad cockpit table, centralised between the helms. The third power control, the Maxpower thruster buttons, are separate again on the starboardside binnacle area. However, despite this disseminated design once you’ve clicked the 360 Docking on, the joystick takes care of most manoeuvres but more about that later.

The forward cockpit area is uncluttered with all sail controls either on the cabin top or back near the helms. Here a pair of hefty Harken 70.2 self-tailing winches with jammers reside at the helms for the genoa sheets while on the cabin top optional electric versions take care of all halyards – a sensible expenditure on a cruising boat this size. This upgraded gear is all part of the Performance Pack fitted.

The low slung cabin top definitely would benefit from fitting the optional sprayhood into the moulded track, while just ahead the Harken mainsheet track has plenty of adjustment for tweaking the slab reefed mainsail.

Halyards are neatly but sensibly not totally hidden in gutters and run either side of the flush hatches and solar panel – a clever addition. Sidedecks are clear as the shrouds are inboard ahead of the genoa track. A second genoa car track on the cabin roof adjoins the Harken self-tacking jib track, another worthwhile factory-fitted option for short-handed cruising.

Moving forward to the bow, again the area is tidy thanks to the below-deck furler. A 1500w Lewmar V4/5 vertical windlass with capstan is the only protrusion and the rode runs through double rollers from a deep chain locker.

Behind it the large sail locker is a useful space with large entry hatch (for quickly stuffing errant kites) and has ladder access. It would benefit from some more finishing however – exposed wiring and rows of sharp deck screw ends would shred that errant kite.

CLASSIC YET MODERN SALOON
Saloon entry is via the in-vogue saloon style doors – a design that allows the hatch sill to be reduced to 150mm from 300mm for easier access – but washboards would be my preference.

Jeanneau offer several layouts along with three or four cabin options. These include a longitudinal galley, ensuites for all four cabins and variations in the lounge. The review boat came with an owner’s suite forward and two symmetrical aft cabins, with one ensuite there.

In the saloon the lounge included a coffee table integrated into the side bench, though some may prefer a clear bench for stretching out on; yet another option. The portside dinette seats six comfortably and eight at a push while furnishings include moveable chairs with large bases for stability at sea.

The cream-coloured cloth upholstery on the review boat is not the most practical but certainly is a stylish contrast to the light Alpi wood veneer throughout which gives a modern yet practical feel to the saloon. Good touches include the compression post clad in matching wood, nicely integrating it into the forward bulkhead of the saloon.

There’s always a compromise with the open plan layout of modern cruising boats when it comes to moving around in their saloons on the open sea but the 509 does have longitudinal wooden handrails in the high ceiling and the for’ard bulkhead as well as in the cabins.

In the T- shaped galley, space is aplenty as you’d expect on a 50 foot cruising boat. Double sinks and dual fridge/freezer (255L) should cope with most chilled items while the three burner Eno gimballed stove/oven and microwave takes care of culinary eventualities.
A stylish 20 bottle wine chiller, an optional extra beside the lounge, ensures the party kicks into full swing while above is a work surface, but perhaps a bit too far away for the chef. Other good features include soft-close drawers and excellent storage thanks to more than 15 cupboards throughout the spacious saloon.

The 509 comes with an impressive list of white good options including washing machine, aircon, dryer, water maker and even a desalinator that generates 60L/PH. Running all this 220V equipment requires the 6.5kw generator to be installed in the stern quarter.

Thanks to deep bilges, in the saloon any minor water ingress won’t affect stability and parts of the area are useful storage. There’s also plenty of depth around the 75hp engine, set high on stainless mounts with the ZF pod saildrive gearbox accessible from the cabins, along with main oil filter.

Lifting up the companionway gives quick access to top-up the oil, water filters and 110amp starting battery. House batteries are triple 110 A/H with another two optional and an 80A alternator runs off the Yanmar. Alternatively, trickle charging the batteries can be done from the optional 68w solar panels integrated into the cabin top.

The portside navigation faces aft and shares the dinette seating. It is dominated by a large 26” LED screen that can show charts and other media but there’s enough room for paper charts – always an essential for secondary use and maintaining separate position fixes – thanks to a large table with nearby cupboards; where a traditional plotter could be installed.

The master cabin in the forepeak is a pleasant berth with good natural light from elongated portholes and double deck hatches (while night lighting looks to be a mix of LED with some halogen throughout the boat).

The island bed has separate mattresses and is surrounded by fitted wooden surfaces – all that’s missing is some longitudinal shelving as there’s a lot of topside height. Over at the vanity, the table is a good office space and has a movable stool styled similarly to the dinette chairs. Again, oodles of storage with wardrobe and cupboard space on either side and under the bed.

For ablutions the ensuite has a shower area separated from the Jabsco head with Perspex door. Other pluses here include a shower seat and four cupboards finished in the Alpi Teak veneer used throughout.

Guest accommodation, in the two asymmetrical stern cabins, is fairly standard but with good surrounding shelf space. Only downside is the cockpit sole bulkhead which intrudes on standing space. Natural light is good thanks to windows and opening hatches and the review boat layout had the bathroom beside the port cabin.

For the full test go to MySailing.com.au…