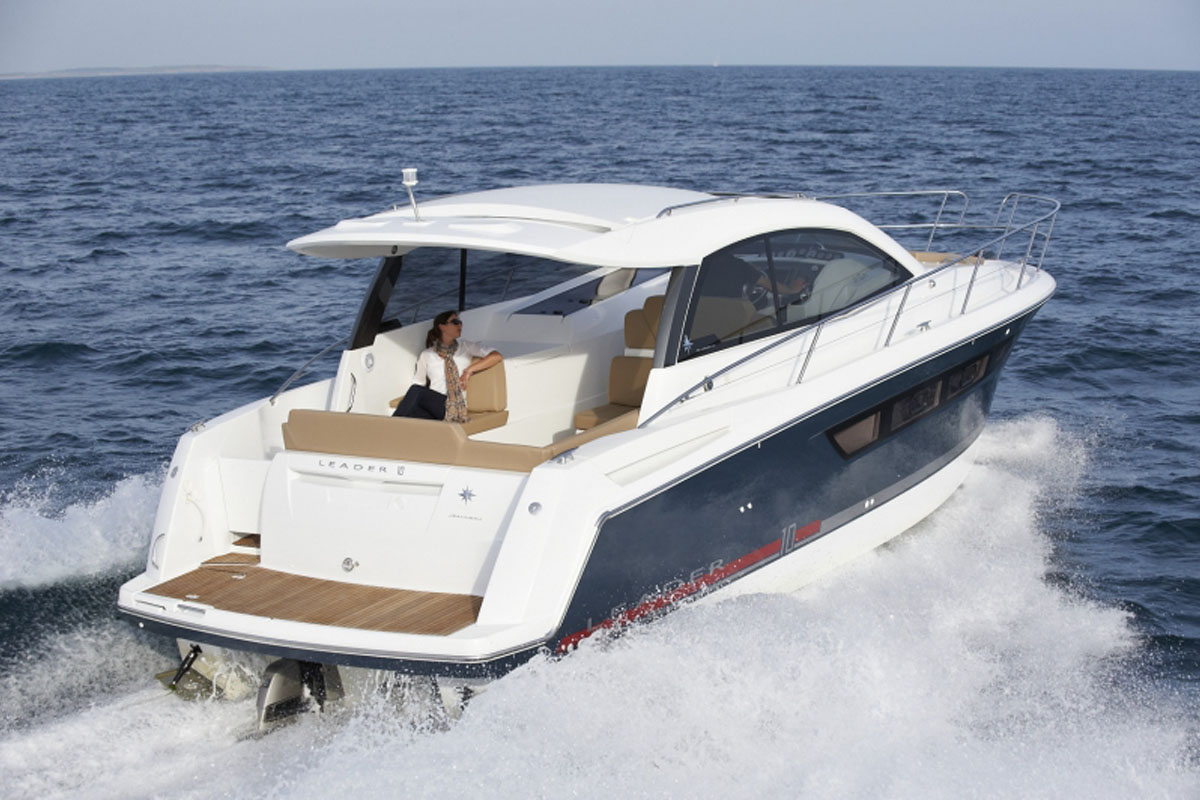 Tested by David Lockwood from boatpoint.com.au

A great value sports cruiser with a bit of chic from France.

OVERVIEW
– Conquering the boating world with universal appeal
Mention Jeanneau and we think yachting. Yet founder Henri Jeanneau had a passion for powerboats foremost. His first all-fibreglass production boat was a runabout released way back in 1961. Yachts followed some years later.

Thus, relative to this French production boat builder’s yachting success here, yet its huge powerboat output, it’s been something of an anomaly. Jeanneau has at best achieved a mere toehold on the local powerboat scene in more than 50 years!

We believe this is because the European-minded boats never really tapped into the Australian psyche. Fleeting local representation hasn’t helped as well. But all that is set to change.

In order to grab a bigger slice of the global boating pie, Jeanneau is now targeting countries like Australia. A new national dealer network has been set-up for its powerboats, which range from small centre console trailerboats through sports cruisers and sport yachts to luxury flybridge models.

Enter the Leader 10 with, quite by design, universal pleasure-boating appeal.

Released in 2010 but only making it to our shores this year, the Leader 10 is an exemplary sports cruiser from Jeanneau. The boat boasts overtly European styling, a big sheltered cockpit and helm deck, and two-cabin accommodation for sleeping a family of four or more.

The Azzura Edition pictured here also has a blue gelcoat hull for added eye candy. It’s certainly a good-looking boat on the water and a fitting flagship of the Leader range.

PRICE AND EQUIPMENT
– Keenly priced turn-key sports cruiser
While there’s a production-boat feel to the interior finishes, the Leader 10 makes strong first and, eventually, lasting impressions. Especially when you see the ticket…

Our turn-key demonstrator cost $379,000 with upgraded Volvo Penta 260hp D4 diesel engines with sterndrives in place of the standard 300hp petrol 5.7s that are some $57,695 cheaper.

The package included Volvo Penta’s joystick docking device that controls both drives simultaneously via fly-by-wire technology. Move the joystick and the boat follows, twist the knob and it pivots. Newbies will like it.

The electronics centred on a Simrad NSS8 chartplotter, an all-in-one navigator and sounder with handy touchscreen. The optional WiFi wireless module for $450 lets you control the NSS8 from your iPad. We’d add that.

Given the sum of the package, the Leader 10 represents great buying. It’s exactly the kind of boat you’d expect to sell well at boat shows, to entice new blood to the fold, and appeal to weekend warriors on big-city waterways.

As the yard builds stock boats, not just to order, there are always new models like the Leader 10 available at short notice. Indeed, you can have a Leader 10 in your hot little hands for summer.

LAYOUT AND DECKS
– Big cockpit well suited to long lunches
With a sharp blue hull, large areas of glazing and oversized sunroof — with superior hardtop instead of soft-top option — you’ll look sharp as you dock, do dinner and then hightail to a marina or bolthole for the night. Down anchor for a sunny Sunday of water play and lunch and your boating experience is complete.

Indeed, the Leader 10 has broad appeal much like a nicely styled European luxury car. The Webasto sunroof mechanism is used by Audi, while the design lines are contemporary and edgy, with square rather than rounded lounges contrasting with cool curved lockers and dark oak or cherry joinery below.

Only experienced boat owners will pick-up on the production-boat nuances, like the unfinished ply in the engineering space, the shower which when wall-hung sprays water on timber laminates, the gas rather than electric stove, and the lack of generator than means the microwave oven and air conditioning can only be used while on shore power.

To reiterate, we’d have our Leader 10 with a generator. But for that, barbecue and tender, pretty much everything else including antifouling was included.

The integrated swim platform is deep enough for the kids to sit and scoff lunch or a couple to sip a drink and toast the sunset, while the nearby hot and cold deck shower is linked to the boat’s 250-litre freshwater capacity, which should sate a family for a long weekend.

Australian-sized, the cockpit features a large C-shaped lounge and dinette for doing lunch largely in the shade of the hardtop. There’s room for eight here, opposite a single seat to port that’s located next to a servery with sink and the gas-bottle locker. The fridge is under the helm bench seat designed for a couple.

Without the customary separate co-pilot seating to port, there’s a clear run to the offset companionway leading below. But with everyone seated to starboard, you might find you need to use some trim tab to keep the Leader 10 on an even keel.

Meantime, the walkaround decks and high rails with intermediate wire make going forward safe for kids. The sun pad will be coveted by the terrible teens seeking their own space, while the Lewmar windlass is recessed to reduce mud splatters when anchoring.

ACCOMMODATION
– Two double cabins and a cool ambience
The modern apartment-like interior has a sense of style courtesy of Italian designer Vittorio Garroni, who’s picked up accolades for his socially adept layouts like that on the award-winning Jeanneau NC 11 sister ship.

Light and ventilation are highlights thanks to abundant hatches and opening portlights, but more so the extended glazing in the hull sides that runs all the way from the forepeak cabin back through the bathroom, galley and saloon.

The lower saloon table can seat four for dinner on an L-shaped lounge, before a wall-hung television, and opposite a small galley module. Food preparation space is enhanced by a solid cutting-board atop the sink.

The Leader 10 has a separate head with hand-held shower that can be wall hung, but the jury is out regarding the longevity of the timber-veneered surfaces in what is a wet room after all. There’s a button for the electric sump pump, which you need to press to drain the water when showering. Mirrors and that glazing add to the sense of space.

The stateroom forward features a full island double bed to appease owners and underscore the fact this is a true small luxury boat. We were impressed by these digs that seemed akin to what you get on a 40-footer.

Cruising couples might leave the double doors open to enjoy the open plan cabin/saloon integration. Storage includes hanging lockers and drawer, while the overhead hatch has shade and insect screens, and the large areas of glazing diffuse any hint of pokiness with the doors closed.

The aft cabin has a double-berth mattress and headroom at its entrance, but there’s some odd cabinetry at the foot of the bed that takes up a whole lot of cabin space for not much gain or storage.

With some reconfiguring, the aft cabin could stretch the full beam of the boat and Jeanneau really should look at this option.

HULL AND ENGINEERING
– Built to European standards
We removed the cockpit lounge backrest as intended and pressed the rocker switch on the dash to lift the cockpit sole. This way, engine access is very good. The integrated sea strainers on the D4s are immediately in view, the fuel filters were forward of the engines and accessible, with fuel outboard in alloy wing tanks.

Bilge and bilge-pump access weren’t so good, as the engines are mounted close together. But the dipsticks and screw-on secondary fuel filters are at hand.

A forward engineering space accessed through a separate hatch contains the batteries and wiring runs. There was some untreated marine ply in here but it was mounted off the floor. Plenty of room remains for storage.

The hull, which features a fine entry, big chines and is eager to plane and please, has a solid GRP running surfaces and presumably cored decks. The yard has ISO 9001 (management) and 400I (environment) certification, but we can’t imagine construction issues given its reach.

ON THE WATER
– Easy to handling, sweet hull
A 30-footer is an easy boat to command and the Leader 10 ably proved that point. Before the carbon-look dash, without using the wheel or throttles, we used the joystick — controlling the engines — to assist with our departure.

But to be honest it’s a rather clunky bit of gear and the boat lurches and bobbles when you’re trying to make small incremental movements. We believe a simple bow thruster would be a more efficient and cost effective option. First-time boaters might disagree.

When manoeuvring out of the marina we also dropped the footrest at the helm and stood with our heads poking through sunroof as intended. This gives you unfettered vision as you don’t have to contend with the broad mullions either side of the big one-piece windscreen.

Clear of the marina, we dropped into a seated position, advanced the electronic throttles and felt the diesel grunt actually push us back into the seat. With both a mechanical compressor and exhaust-driven turbo, these electronic D4 engines accelerate 15 per cent faster to 25 knots than petrol 5.7GXi V8s and offer 30 per cent lower fuel burn at cruise, claims the engine maker.

Cruise of 24 knots at 2600rpm meant Pittwater — or your nearest alternate port of call — could be reached in about 45 minutes. Top speed was 34.3 knots, which is fairly flying and true to the sports cruiser tag, but not quite the factory claim of 36 knots.

As we have found previously, the French are very good hull designers. The Leader 10 proved sporty and dry. With a fine entry and a touch of trim you can cleave a head sea without undue stress.

VERDICT
– All the sports cruiser you need
As part of its global expansion plans, the Beneteau Group acquired Jeanneau in 1995. The group as a whole now enjoys massive multi-platform buying power, terrific production efficiencies and, with greater automation thanks to things like CNC routers, juggernaut Jeanneau can produce boats well below the cost of many competing marques.

Aggressive pricing — the brand has even come under criticism for being too cheap — and factory incentives add further to the boats’ appeal. Then there is the buying power of the Australia dollar versus the devalued Euro. All the planets are aligned. Or are they?

Pitched at first-time ‘big’ boat buyers, the Leader 10 arrives at a time when the entry-level market is struggling to attract new business. But if you are in the market for a 30-something footer there’s now a bona fide alternative to the ubiquitous American-made sports cruiser. And just look at the price!