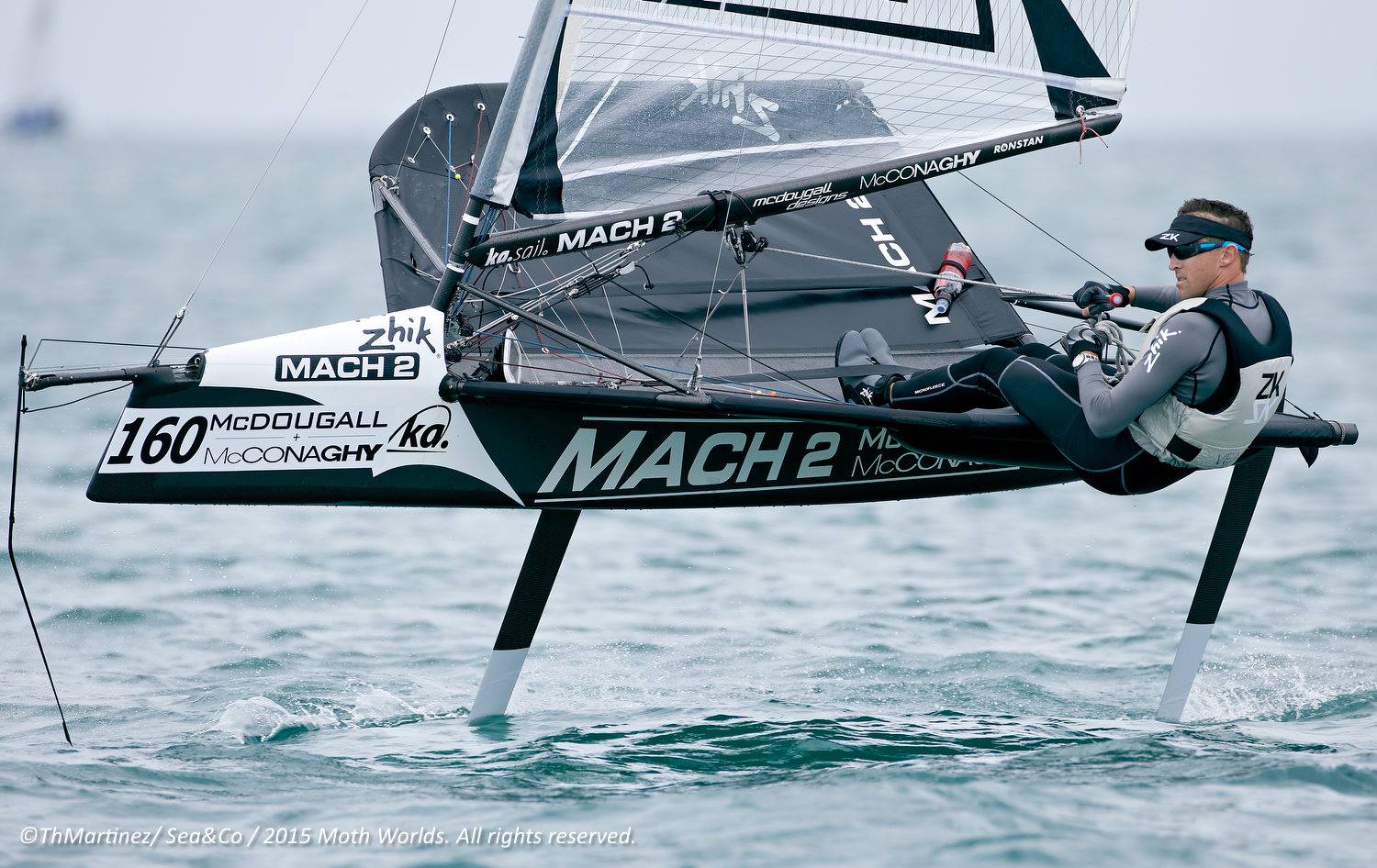 In 2005, 38 South Boat Sales managing director Rohan Veal, had only been in the Moth class for four years and pulled off the biggest coup in Moth history when he won every race of the 2005 Moth World Championships. He was also the first person to win a World title using hydrofoils in any class and then backed this up to win the 2007 World Championships, once again with a clean sweep of first places. In 2009 he left competitive sailing, but returned to the fold at the McDougall + McConaghy 2015 International Moth World Championship.

‘Lord of the Wings’, as Veal is known for his Moth antics, made a last minute comeback. “I’d planned to come down here anyway, just to watch, because I didn’t want to miss it. Andrew McDougall said he had a spare boat, did I want to race. It was a pretty hard decision, but hard to pass up. Now he’s loaned me the boat, I had no choice but to say yes, so I entered the day the Worlds started.”

Protagonist Veal’s 2005 Worlds win left mixed feelings among the diehards who were not keen to accept a ‘hydrofoiler’ as the world champion. Then 28, the Victorian sailor was at the forefront of development in the class.

He first took the foiler to the Worlds in 2003, in France. “I went on the water and did what the English referred to as the ‘Veal Heel’, an aggressive windward heel and bow up technique,” Veal explained in 2005.

The class ‘guinea pig’, Veal moved forward with the next stage of development and went on to clean sweep the 2007 Japan Moth National Championship, professing he did so with “a combination of Andrew McDougall’s design and development on the boat, along with some skill/technique that we have been working on with Andrew and Lex Bertrand for many months beforehand.”

On the funny side, Veal was the subject of police scrutiny, for speeding three times the limit inside harbours!

Veal won the first eight races to clean sweep again with a Bladerider at the 2007 Worlds. Scott Babbage (NSW) finished a comfortable second overall with a Bladerider and Victorian Andrew ‘A-Mac’ McDougall, who designed the Bladerider, was the second Master sailor and a respectable sixth overall.

“I haven’t sailed since, not a Moth or a dinghy – let alone hiked on a boat. My first real taste of getting back into this will be the first heat. I’m just going through the boat with A-Mac (McDougall) and trying to get my head around it.

“All the issues I had back in the early days have been resolved. To finish every race is my major goal,” Veal ended.

Along with Veal, Babbage and McDougall have thrown their hats in the ring at these Worlds held in Sorrento and the trio has designs on the title. Make no mistake; they would not be here otherwise.
Veal is racing a Mach 2, the end result of a McDougall and McConaghy collaboration. The two have spent many years working together to develop the high performance Moth designs, such as the Mach 2, which was immediately successful and has dominated the top of the Worlds leaderboard since 2009.

Racing at the McDougall + McConaghy 2015 International Moth World Championship concluded on Friday 16th January in what was described as the most competitive fleet ever assembled in any World Championships ever held.

More photos and videos can be found here – http://www.mothworlds.org/sorrento/